I'm not sure why it has taken me so long to write about this, but it is something I definitely wanted documented.  Over Thanksgiving week we had a scare with Bradley and had to stay 24hrs at Children's Hospital in Cincinnati.  Neither my husband, parents, friends or myself had ever heard of what happened to Bradley, that's why I thought it to be so important to blog about it, just to spread awareness.
Bradley had what's called an Intussusception.  It is a problem in the intestine and it's described as "telescoping" because the intestine starts to invert on itself similarly to what collapsible telescope does.  It is most commonly caused by a child starting to fight off a cold, or being sick, and the glands swell in the intestine just the same as the glands that swell in your neck.  The swelling of the glands in the intestine push on the intestine walls and can cause it to start telescoping on itself.  Once that happens it continues to get worse every time peristalsis tries to push the waste out.  Thus, it is very painful and normally reported to cause spurts of pain every 15 to 20 minutes.  If untreated it results in lack of blood flow to the intestine, to no blood flow, to eventually death if untreated for 2 days or more.  (Let's not even go there, ummm k?)
The week prior to Thanksgiving Bradley had his first ear infection.  He was put on meds on Sunday.  On Monday I thought he was getting better.  On Tuesday things went downhill fast.  He woke up in the morning and would not eat.  Would not stand.  Would not walk.  Would not even sit...I would sit him down and he would just lean forward and put his head on the ground.  Also, and this is another telling symptom, when I would pick him up to hold him, he would tuck his knees up under him and would not let his legs dangle down. The whole time he was moaning in pain.  I knew right away he needed to be seen.  Long story short I took him to the doc, and she immediately told me to go downtown to Children's.
Treatment:  With an intussusception you are admitted to the surgical floor just in case they can't fix it without surgery.  This was very scary. However, most are treated with an air enema.  Where they basically create a seal around the rear and the pressure of the air can just pop the intestine right out again.  If this process doesn't work they use a barium enema.  Finally, they resort to surgery.
Very thankfully Bradley's was fixed on the first attempt of an air enema.  We are so thankful to all the Dr.'s and nurses that are so skilled.  It was a traumatic experience but truly made us understand how blessed we really are.
As always, some documentation photos.  These were all taken AFTER the procedure was done and he was in a much better state.
﻿
There is something just so sad looking about those hospital cribs and all the wires and tubes. 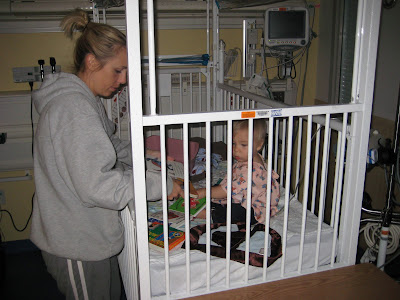 The genious that checked us in gave B a peach gown.  We got tired of everyone calling him a her so finally a nice nurse gave us a rockstar blue scrub shirt. 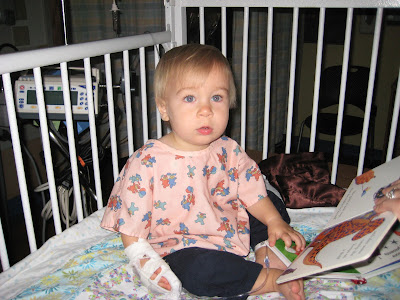 One of the hardest parts was watching/dealing with B having an IV.  He pulled on it but finally adapted to doing things one handed. 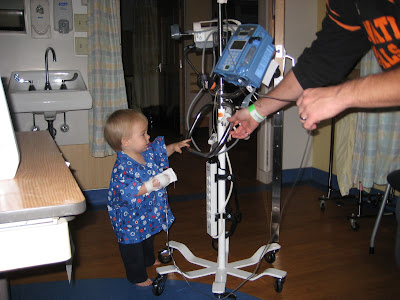 Checking out his cool gear.  He actually enjoyed pushing that thing around the halls and flirting with the nurses. 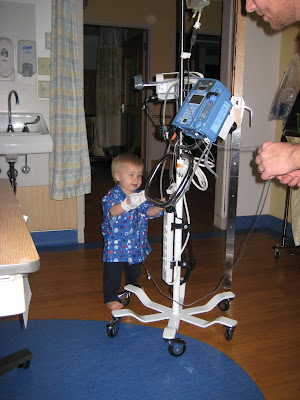 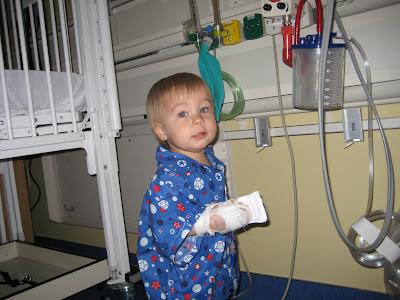 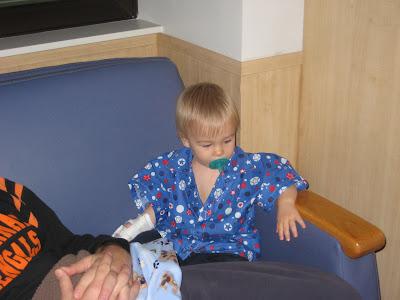 Back to his old self again!! 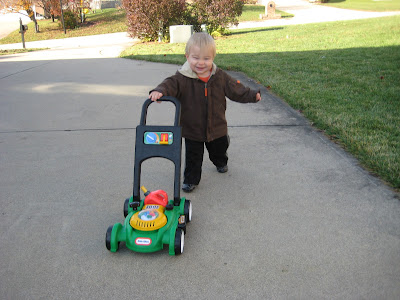 Scary! I'm so happy that everything turned out fine!

Sweet Jesus, I would have been a hot mess! So glad you took him in right away. I volunteer at the Hospital and hate seeing all the medical equipment too - so very heartbreaking. Glad all is well and thanks for sharing this story - I never hear of it either.

oh man!! :( Glad to hear is okay and doing better! I have never heard of this!

wow, how scary!! glad things are all okay... and stupid person for the peach gown.. and b looks so handsome in these!!

Wow! How scary! So happy to hear that Bradley is back to his happy healthy self again!!

Oh yeah and im glad you posted this because I have never heard of that either! And I'm a doctor on google!

I cannot even imagine the horror of this. I am so sorry for the scare, but so grateful you had him seen quickly and that your medical staff took very good care of you. xx

Oh my goodness, I'm so happy to hear that he's on the mend - what a scare! And, he is absolutely precious. So thankful for good hospital care!

I am sorry to hear this happened! Thank you for spreading awareness and for letting us know he is OK! So scary for Mama!

Oh my - I am so happy all is well and doctors were able to diagnose the problem so quickly!

BTW, I changed my blog address. I didn't think that would mess up my followers but apparently it did?

I am so glad everything turned out ok!