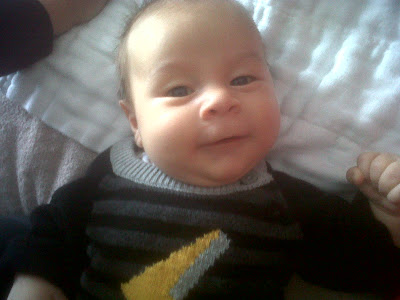 I know some of you are very curious as to what my Pediatrician said to us that slapped me right back into my infertile mind. So I will begin with that story.
It was actually at one of our first appointments, either 1 week or 2 week old apts. I do love our pediatrician because he (in the beginning) was spending just as much time, or even more time talking about me and how I'm feeling as compared to how Bradley was doing. I do think that was really nice. However, he was asking us some question about how the pregnancy went or something, and I had mentioned that being pregnant was easy, it was getting pregnant that was the hard part, and then I went on to explain our IF struggle. He then asked if we wanted more children and when. I said something like, "Well, we want to give Bradley a good shot at being the only kid for a while, and maybe give him a chance to get out of diapers before we give him a sibling." Well I was expecting to hear back something to the effect of , "Oh how nice!" Or even, "Good idea, diapers are expensive." But no, this is what I got..."Oh really? Are you sure? Most parents I know that went through fertility are very scared they won't be able to get pregnant again and they start trying right away." He even added a shocked looking face and scary tone to his voice. (Ok, maybe he didn't make it that dramatic but of course, that's how I took it.)

I think I was stunned, shocked even, and spent the rest of the appointment with my jaw dropped and my eyes wide open. I think it took me a good 10 minutes to finally blink again. "Thanks for that doc, now I am terrified and feeling the need to call my RE to tell her it's CD1 please call in my meds."
On that note, last week I had my post-partum appointment with my OB. We talked about the game plan in moving forward with my PCOS. I feel like having PCOS and breastfeeding puts you in a huge gray area. Because of breastfeeding, I might not get a period. Because of PCOS I might not get a period. So, if I don't get a period it's hard to tell which is the reason for the absence of Aunt Flow. So the big question is how log to we wait until they put me on the pill again. Now, I HATE the idea of going back on the pill but because of the cysts I know that it is more healthy for me to be on the pill and having regular periods than to not be on any medication. But I would really like a shot for my body to regulate itself and go 'all natural' if you know what I mean.
But then there is the whole issue of what happens if I spontaneously get pregnant now. First off, I know for that to happen pigs would fly, fat ladies all across the world would be signing, and unicorns would be real. However, my doc said she has had patients with PCOS get pregnant right after they give birth. For that reason, she asked if I wanted to be on the pill right now. I declined. But it has made me wonder what if.....................

My plan for now is to wait it out until my next apt which is in March. At that point we might decided to induce a period and go on the pill. But to me....if I'm still breastfeeding that still might be to early to go that far. I don't know. Like I said...gray area.
In conclusion to this whole post: PCOS SUCKS!
Tiffany
Posted by Tiffany 23 comments:

Merry Christmas! Now please put on a mask and gloves. 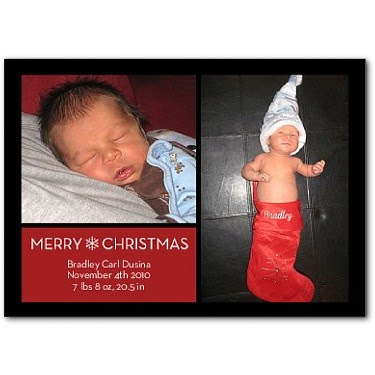 Hope everyone had a very merry Christmas! Our was great. I can't tell you how many times hubs and I looked at each other and said, "Can you believe it, last year at this time we thought we'd never get pregnant! Last year at this time Bradley wasn't even created yet!" It truly is a miracle.

Now onto more important things....GERMS! Yup, I admit it. I have completely become a germ-a-phobe and it was in full force for Christmas. I did not let my baby get passed around to be held and people probably thought I was ridiculous for that but I don't care.

1. The automatic shut off on the vibration for the My Little Lamb

2. Squeegy-ing my son's nose. (That's what we call the suction thing)

3. Breast feeding while blogging. Typing with one hand is hard, and slow.

5. OB apts. They are back to being boring.

6. Night time poops that are never ending and dirty 5 diaps in one change.

Next post I will update on my post-partum OB check and the plan to move forward with my PCOS, also on the thing my pediatrician asked me that sent me right back to my mindset of a constantly worried infertile.

Yes, I'm still amazed that milk is coming out of my boobs.

Just needed to take another moment to talk about nursing.

Can I just tell you how good it feels to get the correct latch? It feels like such an accomplishment.

I would equate it to that feeling you get when you start the lawn mower on the first try. Like you just won the gold. Yes, it's that amazing.

However, it's a good thing you don't need to start the lawn mower every 3 hrs!

My boy has gained over 3 lbs since birth! Go boobs go!

I Though I'd Never Be "That Mom"

Hubs walks in the door from work.

"Ok so, today he did so good. He went 3 hours between all his feedings. Plus he had a blow out and it totally got all over his onesie. But that's ok because I was kind of excited to put him in a new outfit. And then it was 4 o'clock and he wasn't supposed to eat again until 5 so I gave him a bath and he did so great and it tided him over until 5. But I think we need to start soaking him in the tub so he doesn't get too cold. And he did tummy time but he loves being on his tummy so he just laid there until he fell asleep. Then he had another huge poop but it stayed in the diaper. So here he is, full, clean, dry, and happy. And I vacuumed, see?"...."Oh yeah so how was your day?"

But to be honest with you...I've never been so happy talking about nothing but my day cleaning my baby's butt. Ah, this is the life! 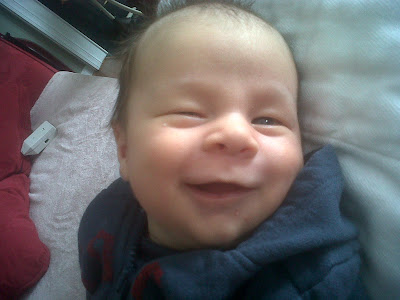 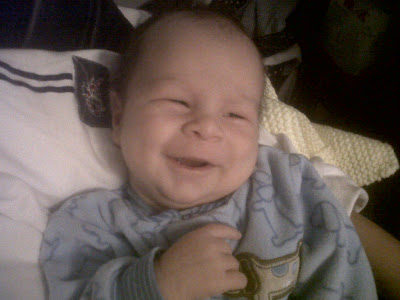 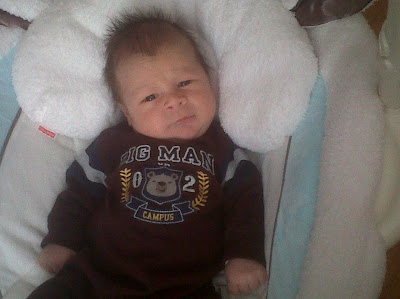 For more adorable (if I do say so myself) pictures of our baby boy please add my family blog at http://dusinafamily.blogspot.com/

It's hard enough for me to blog, remain witty as I blog, and post pictures to two sites. Please understand! My family blog will be updated with pics of our growing sprout and this blog is where I will continue to drop f-bombs and talk about leaky nipples. Enjoy!